Lateritic weathering has a considerable economic significance above all for the mining of relevant metals predominantly nickel and aluminium. 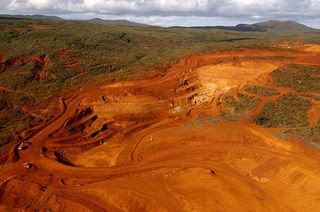 Nickel laterites supply presently 44 % of the world nickel production and constitute 73 % of the continental resources. In the near future they will obtain the first position also in the production. The ores are bound on ultramafic rocks above all serpentinites which consist largely of the magnesium silicate serpentine containing approx. 0.3 % Ni. This mineral is nearly completely dissolved in the course of lateritization leaving behind a very iron-rich, soft residue in which nickel is concentrated up to 1 - 2 % Ni (for main element percentages see the proceeding table). The bulk of this so-called nickel limonite or nickel oxide ore consists of the iron oxide goethite in which nickel is incorporated. Therefore it cannot be concentrated physically by ore dressing methods.

Below the nickel limonite another type of nickel ore has formed in many deposits. This is called nickel silicate ore which consists predominantly of partially weathered serpentine. It is depleted in magnesium and forms with 1.5 – 2.5 % Ni the most relevant type of lateritic nickel ores. In contrary to the relatively enriched limonite ore, the nickel silicate ore owes its nickel content to a process of absolute nickel enrichment. The nickel is leached downwards from the overlying limonite zone since not all of the nickel, which is released from the serpentinite in the course of nickel limonite formation, can be incorporated in goethite and therefore cannot be fixed in the limonite zone. The downward migrated excess nickel is incorporated in the Mg-depleted serpentine and occasionally in neo-formed clay minerals predominantly smectite. Some deposits show admixtures and layers of secondary quartz which is precipitated from weathering solutions supersaturated in Si, due to a rapid dissolution of serpentine.

A third type of lateritic nickel ore is garnierite which is found in pockets and fissures of the weathered ultramafic rocks. The green garnierite ore containing mostly 20 – 40 % Ni consists of a mixture of the phyllosilicates serpentine, talc, chlorite and smectite in which a high percentage of magnesium is substituted by nickel. It is also formed by downward nickel leaching and precipitation in hollow spaces of the weathered rock. Today, nickel silicate ores with high portions of garnierite are largely exhausted. Important deposits of nickel laterite are located in many tropical countries above all in New Caledonia and Indonesia.

Bauxites are almost the only source for the production of aluminium. There is no principal difference between laterites and bauxites since bauxites are nothing else than highly aluminous varieties of laterite showing continuous transitions. Bauxites largely consist of the Al-minerals gibbsite Al (OH)3, boehmite and diaspore AlOOH together with the iron oxides goethite and hematite, the clay mineral kaolinite and small amounts of anatase. In commercial bauxites the kaolinite content must be low. Bauxite was named after the French village Les Baux-de-Provence where it was first discovered.

In geosciences lateritic bauxites (silicate bauxites) are distinguished from karst bauxites (carbonate bauxites). The early discovered karst bauxites occur predominantly in Europe and Jamaica on karst surfaces of limestone. They also formed by lateritic weathering of silicates either from intercalated clay layers or of clayey dissolution residues of the limestone. These bauxites frequently contain boehmite and diaspore in addition to gibbsite. The bauxites in Jamaica rest on tertiary limestone and are exposed at the surface whereas the European bauxites are bound on older carbonate rocks of jurassic and cretaceous age. If they are covered by younger sediments they have to be mined underground. Their contribution to the world bauxite production is today relatively small.

Most dominant are nowadays the tropical silicate bauxites which are formed at the surface of various silicate rocks such as granites, gneisses, basalts, syenites, clays and shales. As already discussed, the formation of bauxites demands a stronger drainage as laterite formation to enable precipitation of gibbsite which is the prevailing aluminium hydroxide in lateritic bauxites. Zones with highest Al contents are frequently located below a ferruginous surface layer and are due to downward leaching of aluminium which is more soluble than iron under oxidizing conditions. Near the parent rock interface gibbsite frequently replaces primary minerals predominantly feldspars which results in a preservation of the primary rock structure.

Large deposits of lateritic bauxites with a high production are in Australia, Brazil, Guinea and, Indonesia, India together with Guyana, Suriname and Venezuela.

High grade iron ores on top of tropical deposits of banded iron formations (BIF) are also attributed to lateritic weathering which causes dissolution and removal of siliceous constituents in the banded iron ore.

Lateritization processes are equally relevant for the alteration of gold deposits. In the tropics the laterite cover around outcropping gold-quartz-veins often shows a pronounced gold dispersion halo which can be traced by geochemical exploration. It is proved that the primary gold is partially moved in solution and re-precipitated in secondary gold particles with lower grain size and reduced Ag content. Locally also the secondary lateritic Au mineralization is workable.

The importance of laterite as building material has already been mentioned. More relevant as their local use for the construction of simple houses is their application as a road building material. The suitability of lateritic materials above all of lateritic gravel is tested by several methods of engineering geology.

The significance of lateritization for agriculture is not positive since strong leaching results in the impoverishment also of nutrients in lateritic soils. Moreover the hardening properties of many laterites complicate agriculture. Only the friable red-brown lateritic soils on basaltic rocks enable good crops.