Ophiolite is a stratified igneous rock complex composed of upper basalt member, middle gabbro member and lower peridotite member (Fig. 1). Some large complexes measure more than 10 km thick, 100 km wide and 500 km long. The term "ophiolite" means "snake stone" in Greek. Basalt and gabbro are commonly altered to patchy green rocks, and peridotite is mostly changed into black, greasy serpentinite. The term comes from such serpentine appearance of these altered, metamorphosed, or sometimes highly fragmented members. Ophiolite is interpreted to be thrust sheet of ancient oceanic lithosphere which has been obducted over the continental crust in the course of orogeny. The ophiolite succession can be correlated with the seismologic layering of the oceanic lithosphere (Fig. 1). The sedimentary cover correspond to Layer 1, basaltic pillow lava matches Layer 2, sheeted dikes and gabbro with occasional plagiogranite intrusions are correlated to Layer 3, and ultramafic cumulates and residual mantle peridotite represent Layer 4 (mantle). 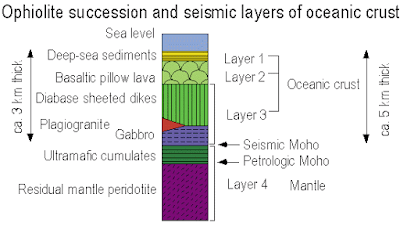 2. Ophiolite examples and their occurrences 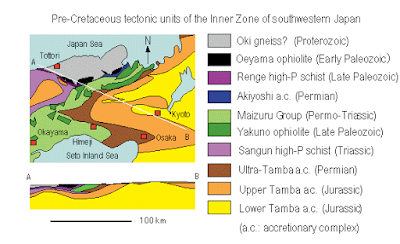 Ophiolites may have formed either at divergent plate boundaries (mid-oceanic ridges) or convergent plate boundaries (supra-subduction zones; i.e. island arcs and marginal basins). They are called MOR and SSZ types, respectively. These types are identified by chemical composition of the rocks and minerals in comparison with those from various tectonic settings on the earth at present. 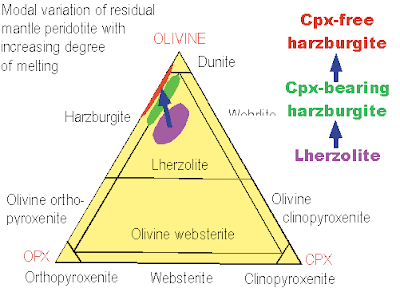 Ophiolitic igneous cumulates shows systematic variation in the crystallization sequence of minerals corresponding to the petrologic diversity of the underlying peridotite mantle. The mineral crystallizing next to olivine varies from plagioclase through clinopyroxene to orthopyroxene as the degree of melting in the underlying mantle increases (Fig. 4). The characteristic cumulate rocks correspondingly varies from troctolite through wehrlite to harzburgite. 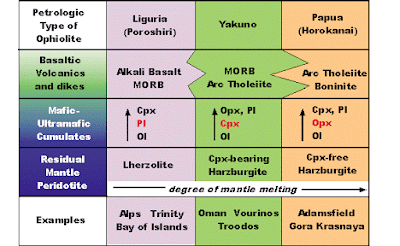 4. Ophiolites in the circum-Pacific orogenic belts

Ophiolites in the circum-Pacific orogenic belts generally occur intercalated among the accretionary complexes and show multiple tectonic superposition as exemplified by the Klamath Mountains in western USA (Fig. 5). The oldest early Paleozoic ophiolite occupies structurally uppermost position, and younger ones take lower seats. Such "Confucian" ophiolite belts are also present in Japan and northeastern Russia, and forms "circum-Pacific Phanerozoic multiple ophiolite belts". This structure may be formed by underplating of the accreted oceanic material and trench-fill sediments beneath the overlying SSZ lithosphere (ophiolite) and subsequent underplating of the younger SSZ-trench system. The circum-Pacific ophiolite belts are also characterized by extreme petrologic diversity. Juxtaposition of depleted, clinopyroxene-free harzburgite and fertile lherzolite is common, though such a case is rare in the collisional orogenic belts. 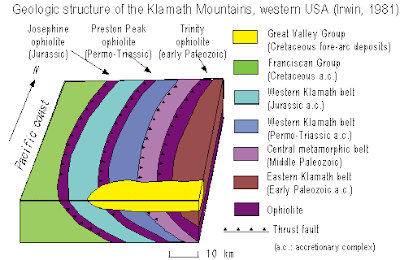 Reported formation ages of ophiolites show three distinct peaks at about 750, 450 and 150 Ma, respectively (Fig. 6). These are called ophiolite pulses. Each pulse corresponds to the period of worldwide magmatic event as represented by voluminous granite intrusions.

Production rate of oceanic crust was distinctly high during the 80 and 120 Ma interval of Cretaceous time, as evidenced by wide area of the ocean floor formed in this interval. Magnetic reversals of the earth, which take place every million years, were unreasonably absent during this interval. These facts lead Larson (1991) to a hypothesis of superplume, a big plume of hot mantle rock which ascended from core/mantle boundary and erupted beneath the South Pacific ocean during this interval, causing worldwide magmatic event. This interval corresponds to the later half of the Mesozoic ophiolite pulse (Fig. 6). 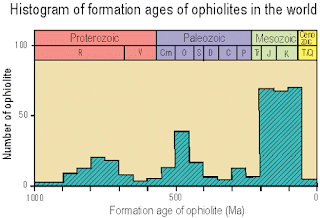 Figure 6. Histogram of formation ages of ophiolites in the world

6. Ophiolite belts on the earth 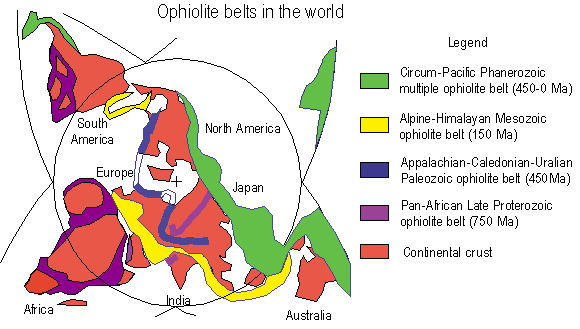 Figure 7. Ophiolite belts in the world