A classification of quartz textures in epithermal veins is developed from a review of the available descriptive literature and observation of approximately 400 specimens and 150 thin sections from more than 20 epithermal deposits and prospects. Thirteen quartz textures are defined (Fig. 1) on the basis of mutual geometrical relations among individual crystals, or crystal aggregates, and/or the internal features of individual grains. Most of the textures described are readily identified in hand specimens. A few, however, can only be viewed under the microscope. The majority of textural terms used in this classification are adopted from existing terminology with some modification where necessary. 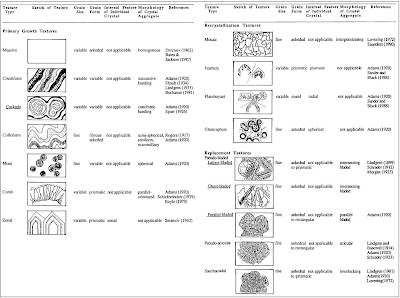 Massive
This is a general term that refers to quartz veins which have a more or less homogeneous appearance over wide areas and display an absence of banding, shear fractures, or similar features.

Crustiform
The term crustiform is analogous to crustification banding described by Adams (1920), Lindgren (1933), and Shaub (1934). This texture involves successive, narrow (up to a few centimeters), and subparallel bands which are distinguished by differences in texture, mineral proportions, and/or color. Commonly, banding is symmetrically developed from both walls of a fissure (Fig. 2a).
Cockade: This is a sub type of crustiform texture, as described previously by Taber in Adams (1920) and Spurr (1926). In breccias, concentric crustiform bands surrounding isolated fragments of wall rocks or early vein materials pro­duce cockade texture.

Colloform
This term was first proposed by Rogers (1917). In general, where the external surface of a mineral or mineral aggregate shows combined spherical, botryoidal, reniform, and mammillary forms, it is called colloform. For silica minerals, this texture is a characteristic feature of chalcedonic aggregates in fine rhythmic bands (Fig. 2b). Under the microscope, chalcedony in colloform banding often has a micro fibrous habit with sharp re-entrant angles between adjacent contacting spheroids.

Moss
This texture has features similar to the "microbotryoidal gel structure" described by Adams (1920). In hand specimens, silica aggregates display a heterogeneous turbid appearance, similar to moss vegetation (Fig. 2c). Under the microscope, groups of spheres (usually ranging from 0.1-1 mm in diam) are highlighted by the distribution of impurities within aggregates of silica minerals (Fig. 2d). Some spherical impurities also show an internal concentric or radiating pat­ tern. Moss texture may gradate to colloform texture if the spheres become interconnected.

Comb
Comb texture refers to groups of parallel or subparallel quartz crystals which are oriented perpendicular to vein walls, thus resembling the teeth of a comb (Fig. 2e). Normally crystals display a uniform grain size and have euhedral terminations at their free ends. This texture is frequently described in the literature, including Adams (1920), Schieferdecker (1959), and Boyle (1979). 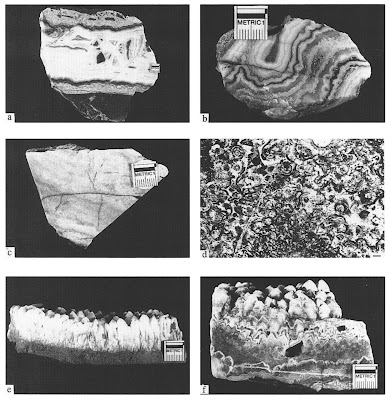 Mosaic
Aggregates of microcrystalline or crystalline quartz crystals have highly irregular and interpenetrating grain boundaries (Fig. 3a). Inhand specimens, the sample usually has a vitreous and tightly packed appearance. This texture is equivalent to a jigsaw texture which is one of most common micro textures in jasperoid (Lovering, 1972) and is also noted in some epi­ thermal deposits (Saunders, 1990).

Feathery
Under the microscope with crossed polars, individual quartz crystals display a splintery or feathery appearance seen only as slight optical differences in maximum extinction positions. This texture is usually well developed on the margins of quartz crystals with a clear euhedral core (Fig. 3b) or as patches throughout quartz crystals (Fig. 3c). The term "feathery'' is adopted from Adams (1920), and a similar texture has been reported by Sander and Black (1988), who called it "plumose."

Flamboyant
This texture has been described by Adams (1920) and Sander and Black (1988). The chief characteristic of this tex­ ture is the radial or flamboyant extinction of individual quartz crystals with a more or less rounded crystal outline. Similar to the feathery texture, it can either be developed in the rim of a quartz crystal with a clear euhedral core (Fig. 3d), or throughout the crystal (Fig. 3e).

Ghost sphere
This texture commonly occurs within microcrystalline quartz as cloudy spheres highlighted by the distribution of impurities (Fig. 3f). Ghost-sphere texture may be regarded as a special moss texture, because both textures have the same feature- spherical distribution of impurities within silica phases such as amorphous silica, chalcedony, or quartz. However, if the host is quartz, ghost-sphere texture is used to characterize the internal feature of quartz crystals. Ghost­ sphere texture may gradate to mosaic texture where the impurities are gradually eliminated and crystal boundaries become interpenetrating. Some quartz crystals with ghost-sphere texture display radial extinction and therefore share the characteristic features of the flamboyant texture. 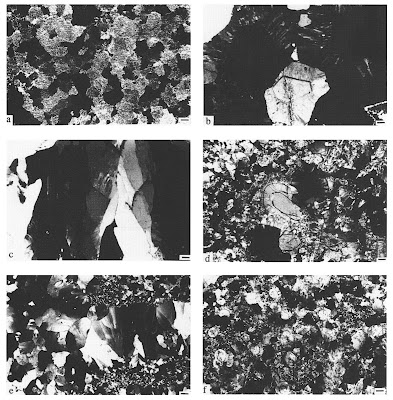 Pseudobladed
Aggregates of quartz or chalcedony may be arranged in a bladed or platy form. Three subtypes are defined on the basis of the morphology of the aggregate of blades.
Lattice bladed: This texture is comparable with the "pseudomorphic lamellar, platy, or tabular" quartz texture de­ scribed by Lindgren (1899), Schrader (1912), and Morgan (1925). It displays a network of intersecting silica blades with polyhedral cavities partly filled with comb quartz crystals (Fig. 4a). In thin sections, each blade consists of a series of parallel seams separated by quartz crystals or crystallites which have grown symmetrically about the seams and perpendicular to them (Fig. 4b).
Ghost bladed: Blades are identified on the polished sur­ faces of hand specimens by concentrations of impurities. Commonly blades are dispersed randomly within quartz aggregates and lack cavities between the blades (Fig. 4c). Under the microscope, the blades are differentiated from the matrix by differences in grain size, shape, and/or outlines of impurities (Fig. 4d). The thick silica blades usually have a ragged shape with a set of parallel partings.
Parallel bladed: Silica blades are parallel within a group but adjacent groups may have different orientations. The out­ line of groups defines an overall granular pattern in hand specimens (Fig. 4e). The microscopic feature of the parallel texture is essentially similar to that of lattice-bladed texture: each group comprises a set of parallel seams, separated either by rectangular quartz crystals (Fig. 4f), or by prismatic crystals and/or crystallites growing perpendicular to the seams. Adams (1920) described a texture called "lamellar quartz" which has features very similar to the parallel-bladed texture. Fig. 4. Quartz textures III. a. Lattice bladed: a network of intersecting silica blades with polyhedral cavities. b. Lattice bladed: in thin section, each blade consists of a series of parallel seams separated by quartz crystals or crystallites which have grown symmetrically about the seams and perpendicular to them. c. Ghost bladed: blades are identified on the polished surface of the hand specimens by the concentration of impurities. This texture commonly occurs in crustiform bands and lacks the cavities between blades. d. Ghost bladed: aggregates of quartz crystals with superimposed bladed texture identified by outlines of impurities and finer grain size. e. Parallel bladed: silica blades are parallel within each group but  adjacent groups have different orientations.  f. Parallel bladed: each group is composed of a set of parallel-oriented  quartz crystals which have more or less rectangular  shapes.

Pseudoacicular
The pseudoacicular texture was first described by Lindgren and Bancroft (1914) from the Republic district, Washington, and was also reported by Adams (1920) and Schrader (1923). In hand specimens, aggregates of silica minerals, commonly associated with adularia or its weathering products (sericite or kaolinite), display a radial acicular appearance (Fig. 5a). Under the microscope, this is indicated by linear arrange­ ments of fine-grained, sometimes roughly rectangular, quartz crystals and/or by a linear distribution of adularia or its weathering products (Fig. 5b).

Saccharoidal
In this texture, loosely packed vitreous to milky fine-grained quartz aggregates have the appearance of sugar in hand specimens (Fig. 5c). Under the microscope, abundant elongated subhedral crystals, some with double terminations, are randomly distributed in a matrix of smaller, anhedral grains (Fig. 5d). Locally there is an alignment of elongate crystals giving the impression of a crude mesh or network. This is the "retiform structure" described by Lindgren (1901), Adams (1920), and "reticulated texture" described by Lovering (1972). 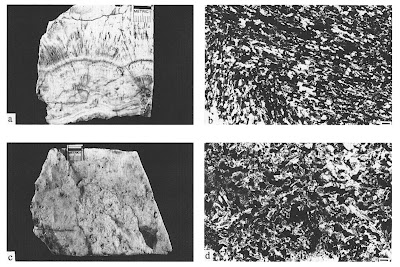 Fig. 5. Quartz textures IV. a. Pseudoacicular: aggregates of silica minerals, commonly associated with adularia or its weathered products (kaolinite or illite), display a radial acicular appearance, caused by differences in color and/or relief in hand specimens. b. Pseudoacicular:  acicular appearance is indicated under the microscope by linear arrangement of fine-grained quartz crystals and linear distribution of clay minerals. c. Saccharoidal: loosely packed fine-grained quartz aggregate, having a sugary appearance in hand specimens. d. Saccharoidal: under the microscope, slender subhedral crystals are randomly distributed in a matrix of smaller, anhedral grains. Locally there is alignment of elongated crystals giving the impression of a crude mesh texture.

Discussion on the textural classification

The term "texture" is used for the general physical appearance or character of a rock, including the size and shape of, and the mutual relations among, its component minerals. Saccharoidal and mosaic textures typically belong to this category. The term "structure" is generally used for the larger features of a rock and is determined by the spatial arrangement of its mineral aggregates which differ from one another in shape, size, composition, and texture. This is best represented by crustiform structure. However, the two terms are often used interchangeably, and some textures may parallel major structural features. For instance, colloform and comb can be used as both textures and structures. Many people today prefer to group texture and structure together in regard to the general features of a rock or vein (Lovering, 1972; Craig and Vaughan, 1981; Augustithis, 1982; MacKenzie et al., 1982). This concept has been applied in the present study.

Since the criteria for this classification are defined by various parameters (such as the morphology of mineral aggregates, the internal feature of an individual crystal), a certain specimen could be described in several textural terms by using different criteria. For example, comb texture describes groups of quartz crystals sharing the same orientation; how­ ever, individual crystals in comb texture could also display zonal texture or feathery texture. Crustiform texture refers to the banded arrangement of mineral aggregates which differ from one other in texture and composition, it naturally includes many other textures within each band. The way to deal with this problem is to name all textures observed, so that the characteristic of the sample can be illustrated entirely.